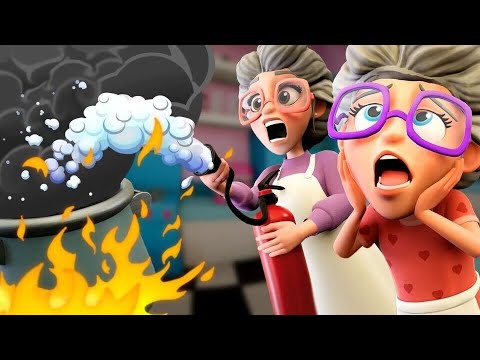 HEY EVERYBODY!! Me, Niko, and Navey were just watching some A for Adley videos tonight when dad came downstairs and said “It’s BEDTIME”! So we all jumped up and ran away from him, but then mom joined in and they caught us!! So we went upstairs to start our Bedtime Routine. First, we needed to brush our teeth. We had a race to see who could brush their teeth the best and fastest! After that we had to put our pajamas on, so we all ran into our rooms to change! I definitely won the PJ’s race! Navey is the first one to go to bed, but she wanted to watch a show before she want to sleep. So we got an iPad and turned on a section from our newest family cartoon “Bedtime Stories” the story we watched was called “Rita and Betty Cooking Show”

Well hello there folks! Welcome to Rita and Betty’s Cooking Show!! I’m Rita! Today we are going to be making our BEST secret recipe Chocolate Chip Pancakes! For this recipe we need lots of ingredients like: Cucumbers, Milk, Cheese, Butter, Lemons, and Flour! First you want to mix all the ingredients into a pan, but make sure you don’t turn the pan too hot becau… AHH THE MILK IS ON FIRE!! Like I was saying… make sure not you don’t make the stove TOO hot or else the Milk will catch on fire like us. After that you can throw that pan in the oven for the final baking stage.. but make sure to do a little shimey dance while it’s baking! Once you hear the bell ding you can take it out of the oven.. but wait for it to cool before you eat it because it will be hot as lava!

After we finished watching Rita and Betty, Navey was ready to go to sleep! So now it’s Niko’s turn to go to bed.. but we still weren’t tired!! So we decided to watch 1 more show before we go to sleep! This time it was s SNEAK PEAK at our cartoon for NEXT month… this one is a spooky cartoon for Halloween! It didn’t have a name yet so I decided that we are going to call it Trick or Treat! It’s from our video where we went Trick or Treating inside our house! It has Dracula Dad, an EViL SCiENTiST, and a Spooky Mummy! There’s even a giant spider in the basement! It was really scary but we got LOTS of candy and some donuts!

After that Niko was really tired so he went to sleep.. but I wanted ONE MORE THING to do before bed! I wanted a bedtime story!! Dad said we could do 1 story but we were going to watch it instead of read it! He got his phone out to watch the last thing before bed! It’s our newest cartoon.. this one has all of our favorite cartoons from the past like The Lost Mermaid, That time cartoon Adley and Mom explored Barbie’s DreamHouse, Hair Salon, Sticker Pox, and even our new Rita and Betty cooking show cartoon!

Once that ended I was definitely ready to go to sleep.. but I guess dad was too cause he was snoring so loud! Well, I’m going to bed, Thanks for Watching Bye!!